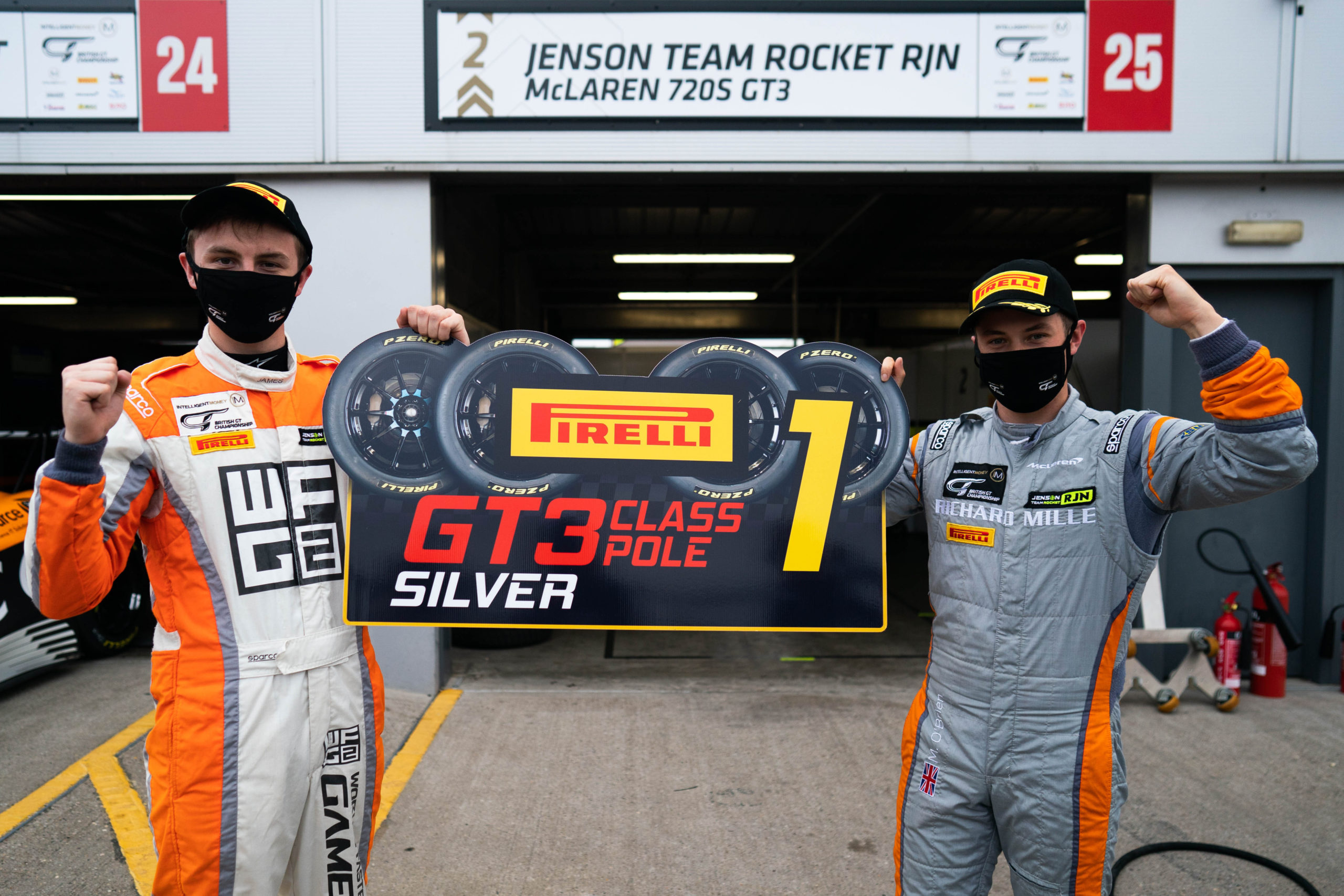 CASTLE DONINGTON, DERBY, UK (Sunday, August 16, 2020) – World’s Fastest Gamer winner James Baldwin has followed up his remarkable debut victory in the British GT Championship by scoring his first pole position for round three of the championship.

Baldwin topped the times in his qualifying session on Saturday with a lap of 1 minute, 27.097 seconds while teammate Michael O’Brien stopped the clocks at 1:27.218 in his session.

The combined average speed of both drivers was good enough to put the No. 2 Jenson Team Rocket RJN McLaren 720S GT3 on pole position for today’s third round of the championship.

The 2.498-mile, 12-turn Donington Park venue hosted the third and fourth rounds of the championship today and gave Baldwin more essential lessons in his development and transition from gamer to racer. The 22-year-old Brit last year earned his “World’s Fastest Gamer” title in the unique #GamerToRacer competition hosted by Engine Media.

The third round of the championship was a two-hour endurance race with O’Brien starting the race in wet conditions. He handed over the McLaren to Baldwin after 68 minutes for the gamer to kick off his longest race stint yet in his brief racing career, and his first in damp conditions.

He crossed the line in eighth place and fourth in the Silver Cup class after two hours of racing – gaining valuable experience on wet tyres.

Baldwin was back behind the wheel for the start of round four – a 60-minute battle that was even tougher on drivers as the track began to dry.

Jenson Team Rocket RJN elected to start Baldwin on wet tires. Drying conditions meant Baldwin had to hold on until the opening of the pit window after 24 minutes to switch to slick tyres. O’Brien took the second stint and fought back strongly at the end to finish ninth overall.

“James went from the highest of highs at Oulton Park and repeated that feeling in qualifying by earning the pole for the first race today,” Engine Media co-CEO and World’s Fastest Gamer Darren Cox said.

“Motorsport has a nasty habit of throwing massive challenges at you just when you think everything is going perfectly. Considering how little real-world experience he has, James handled the tricky conditions really well.

“If this had been his debut race weekend, everyone would be completely thrilled with how he handled everything. But of course, once you have had that first win, your expectations get set a little higher.

“He has proven again that he has remarkable speed – and that speed again reiterates the success of the #GamerToRacer concept. The next time he faces track conditions like this, he now has vital experience to fall back on.”

“I don’t have a trophy to take home this weekend, but the experience gained from Donington Park is much more valuable,” Baldwin said.

“We had a solid day today. It wasn’t great, but it wasn’t awful. You can sometimes learn more when you are not successful than when you get to victory lane.

“Michael (O’Brien) and the whole Jenson Team Rocket RJN team again did a brilliant job all weekend, and I’m just thrilled to have this incredible opportunity.

“We now set our sights on Brands Hatch in two weeks. I did part of my training there late last year, so I’m really looking forward to going back there with the McLaren 720S GT3.”

Baldwin’s journey last year to become the World’s Fastest Gamer was showcased in a six-part documentary series created by Engine Media and shown on leading networks around the world, including ESPN.

Engine Media’s motorsport media brand The-Race.com is following Baldwin’s progress this year by live-streaming the 2020 Intelligent Money GT Championship on The Race’s YouTube channel. Gamers looking to follow in Baldwin’s footsteps have also been able to follow their dreams by competing on the Gear.Club mobile game.

Created by Engine Media’s gamer studio Eden Games, Gear.Club is available for download on both the Apple iOS and Google Play stores.