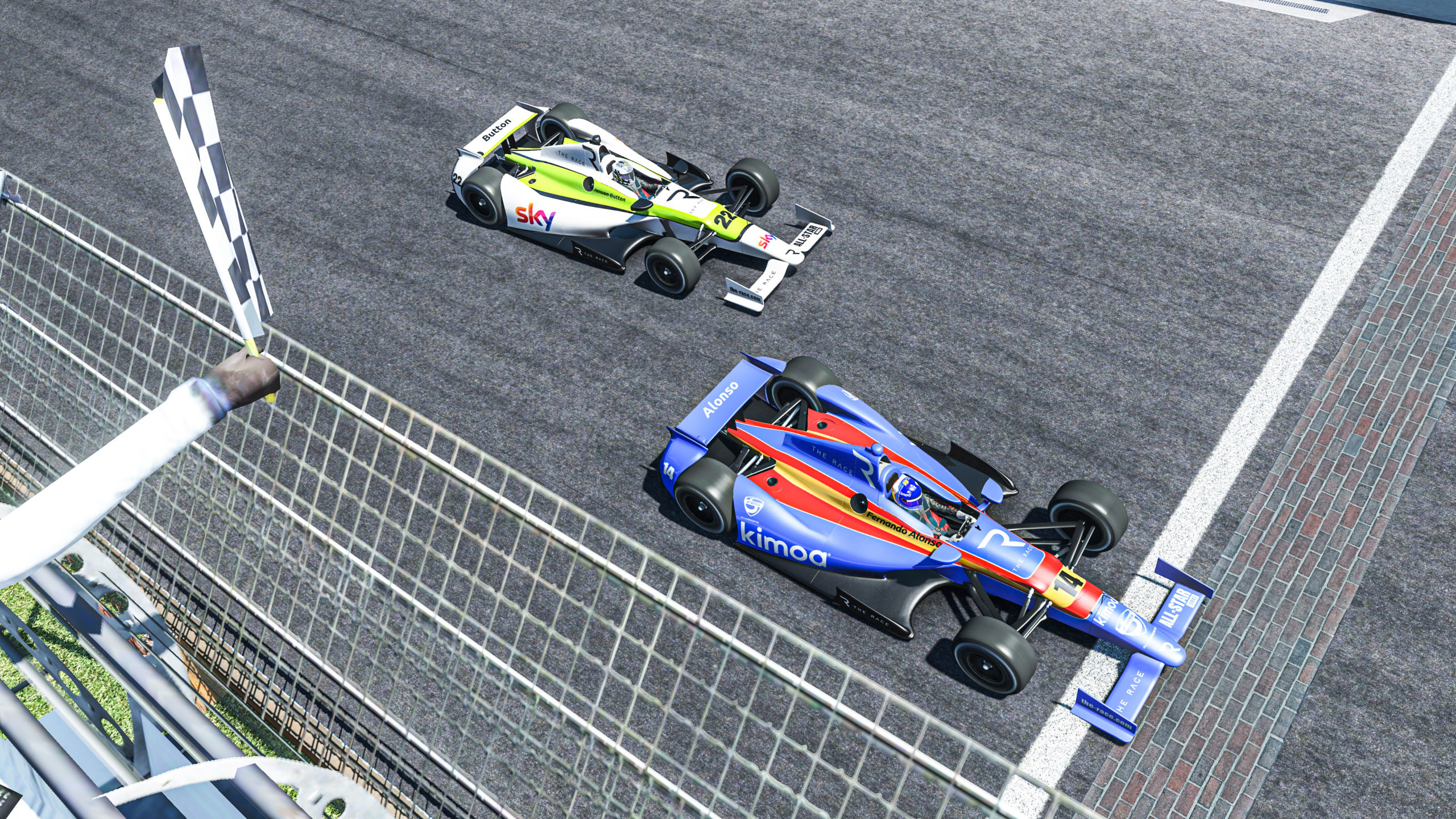 Featuring an entry list with a total of 13 Indy 500 wins to their credit, Alonso not only triumphed in the opening race after chasing down pole winner Petter Solberg (former World Rally Champion), he had to hold off a hard-charging fellow ex-Formula 1 World Champion, Jenson Button.

In the second reverse grid race, Alonso again stunned the opposition with a charge through the pack. He spent much of the race at the front dicing with Monteiro before opening a gap in traffic in the final corners to take his second win.

Three-time Indy 500 winner Helio Castroneves was third ahead of Button and former Le Mans winner David Brabham, whose father Sir Jack started the Indy rear-engine “revolution” at the Speedway in 1961.

Alonso claimed the virtual “Triple Crown” today. He already has real-world wins at the Monaco Grand Prix and two at the 24 Hours of Le Mans.

While he now has the virtual Indy win to complete the set of the wins in the world’s most prestigious races, Alonso will now set his sights on completing the prized Triple Crown achieved at the rescheduled Indy 500 on August 23 later this year. Originally due to be run this weekend, the race was postponed due to the COVID-19 pandemic.

Having only received his Allinsports simulator nine days ago, the Spaniard has quickly demonstrated he is just as fast in the virtual world as he is on the track.

“I think it has been a super enjoyable weekend and this week’s practice as well,” Alonso said.

“Every night this week we’ve been here with the guys, and we chat in the Whatsapp group to work on the car and make sure we had a car to put on a good show on the weekends.

“I’m very new at this! I only received the rig last Thursday before Zandvoort. After one week and a half, I’m still playing with some buttons! It was great today, and it’s good fun always at the Indianapolis Speedway.

“I was super scared of losing the first race! Jenson is a very smart guy and we were both playing games trying to be in front or behind. We were studying each other, but with Jenson you never know. He’s always one step ahead, and I was very worried that I would slip. He had a moment in turn four one lap before the end, and that was enough of a gap for me.”

Here's your double Indy race winner @alo_oficial on his battle with JB – "With @jensonbutton you never know, he is always one step ahead… " The Race All-Star Series – powered by @ROKiTPhonesUK #LegendsTrophy pic.twitter.com/Ja7EYycyDg

During the first race, one legend who looked like he had the pace to challenge Alonso and Button was 1969 Indy 500 winner Mario Andretti. Delayed early in the race due to contact, the 80-year Andretti spent many laps glued to the tail of the two-car lead battle despite being a lap down.

“I had a blast! Obviously, it seemed like I was part of every situation that was happening out there, but other than that, I thoroughly enjoyed it,” Andretti said.

“Will I do it again – you never say never. We have the rig here, I have to get a lot more familiar with it. It was not natural, it was so different. What I have going against me is that you drive it differently.

“The line is a little different, so you have to understand just what the rig wants, what the sim likes and how aggressive you can get. There’s a definite learning curve, no question about it.”

Fellow Indy 500 veteran and two-time race winner Emerson Fittipaldi was another star who impressed. The 73-year-old Brazilian excelled in the second reverse grid race to take 10th place at the flag – his second top-ten after scoring the same result last week.

After today’s results, Button solidified his lead in the championship on 322 points ahead of Emanuele Pirro on 283 and Magnussen on 271.

"I had a blast!" @MarioAndretti looks like he had fun in the #legendstrophy today! The Race All-Star Series – powered by @ROKiTPhonesUK – 📺 Watch now at:
💻 https://t.co/WdVqh7S2NG
🇺🇸 Live on @ESPN
🇬🇧 Live on @Eurosport_UK
#LegendsTrophy pic.twitter.com/oDlJXXd3Lx

Today’s fourth round of the five-round All-Star championship also featured events on the Indianapolis Road Course for the ProCup and #SimMasters championship.

“Today’s performance from Fernando was absolutely incredible but we are extremely proud of our entire field of legends for their performance,” Torque Esports President and CEO, Darren Cox said.

“Racing at Indianapolis is tough and you have to respect the track and each other even though it is virtual. Indy is a venue with an incredible heritage, and our guys treated the race and each other with the utmost respect.

“I don’t think you’ve ever seen a more impressive field of legends racing together. We had so many guys competing today who were just thrilled for the chance to race with Mario Andretti and Emerson Fittipaldi on this track.”

The final round of this second season of The Race All-Star Series powered by ROKiT Phones is scheduled for next week with news on the third season of the ground-breaking championship expected to be revealed soon.

Today’s event was also a first for the championship with television partner ESPN promoting the race to its main channel after previous rounds have been broadcast on ESPN 2.