Based in Barcelona, Spain, Stream Hatchet monitors live-streaming gaming viewer data across all platforms around the world and provides precise analysis for leading brands, esports teams, leagues, and sponsors.

Based in Barcelona, Spain, Stream Hatchet monitors live-streaming gaming viewer data across all platforms around the world and provides precise analysis for leading brands, esports teams, leagues, and sponsors.

Although in 2019, Twitch again had a massive lead in viewership compared to YouTube, Facebook, Microsoft’s Mixer, and other outlets – its audience actually dropped in 2019, falling 10 percent.

“The live gaming industry is quickly evolving. Twitch remains the market leader in watch time, but YouTube and Facebook Gaming are racing to catch up,” Torque Esports President and CEO, Darren Cox said. 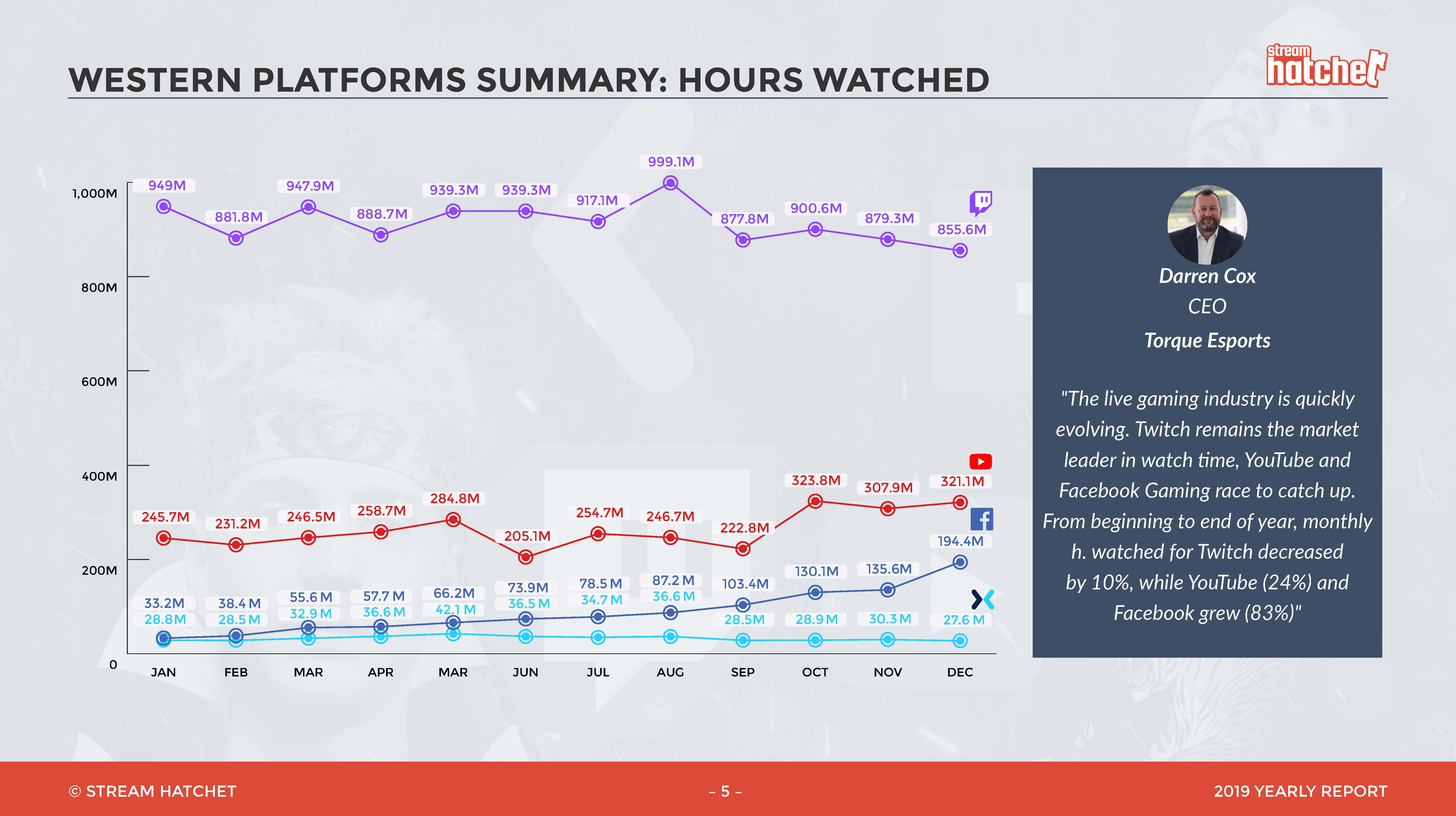 The big competitive gaming streaming news of 2019 was the exclusive signing of “Ninja” by Microsoft for its Mixer platform. From August 2 last year, the popular streamer surprised fans by switching to Mixer with a big-dollar exclusive deal.

The Ninja signing and that of fellow streamer “Shroud” however did not have an immediate positive effect on Mixer’s viewing numbers.

Mixer’s ‘total hours watched’ have actually decreased – showing how loyal the gaming audience is to Twitch, which was a pioneer in the esports streaming space.

While Fortnite continued to hold the top spot in the “gaming streaming wars,” – its numbers continued to decline throughout 2019, according to Stream Hatchet’s data analysis.

“Despite a steady decrease in viewership and player base over the year, Fortnite claimed the top spot for the most streamed game in 2019,” said Yoshio Osaki, President / CEO at IDGConsulting – one of several industry experts quoted in the Stream Hatchet 2019 recap.

“Fortnite did reach a second viewership peak in October with the release of Chapter 2, which was preceded by a mysterious black hole that lasted 24 hours.

“League of Legends, however, continues to be one of the most popular games worldwide, both in terms of hours watched and player base.

“2019 was a very successful year for the game. The record-setting World Championship, increased viewership, and interest in the game increasing with Riot Games’ announcement of the release of new games related to the League of Legends universe on the game’s tenth anniversary.”

“The average viewers per minute for the top ten esports events is more than 250,000 just across four platforms, which speaks to the incredible accessibility and reach of the different leagues and tournaments,” said Doug Watson, Head of Esports Insights at Riot Games – a Stream Hatchet customer.

“For some of these global events, these platforms only represent a portion of the total hours watched by fans. As these numbers continue to climb, esports has the very real potential to redefine the sports experience for the generations of fans to come” 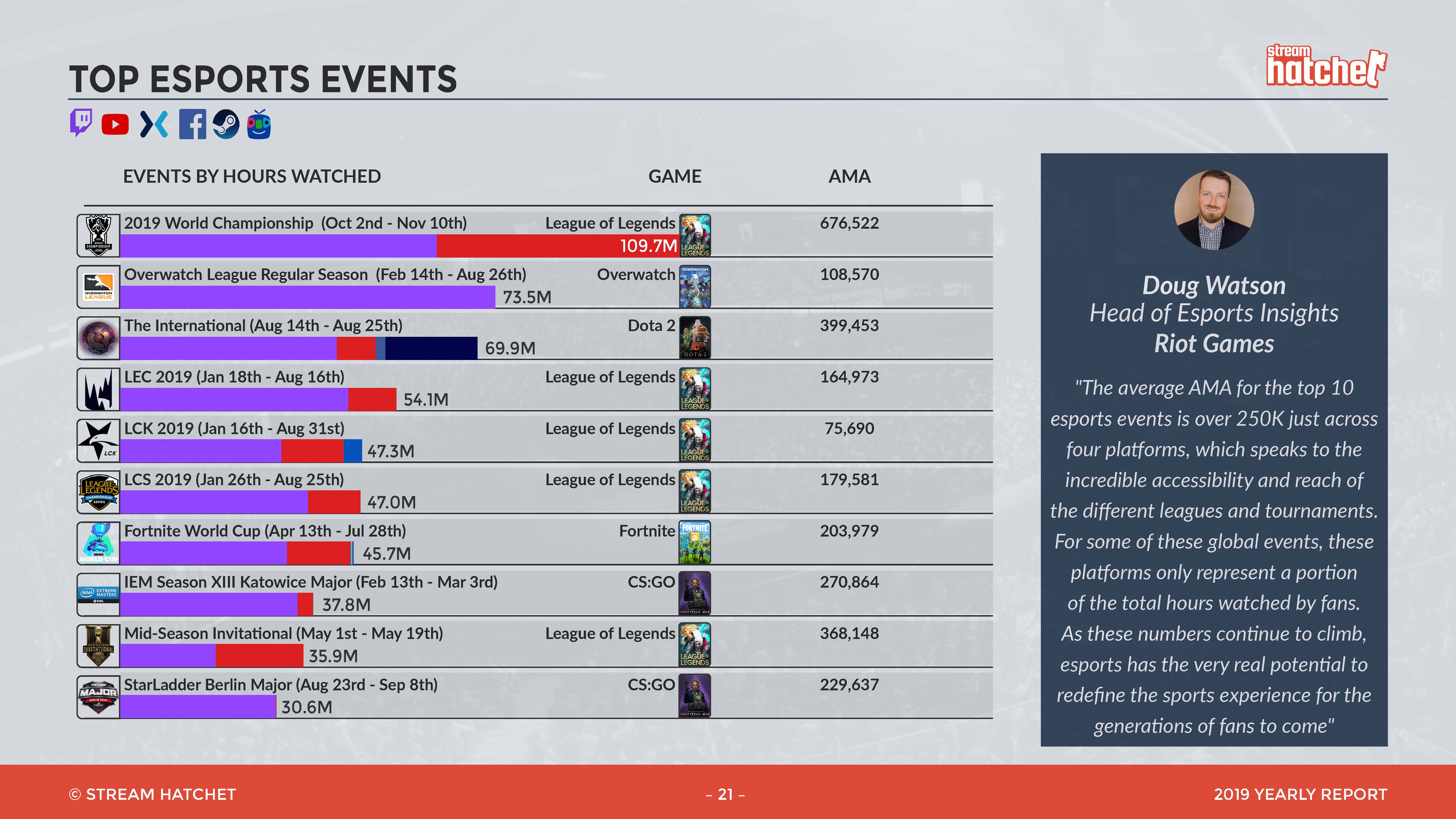 The Stream Hatchet 2019 report also includes analysis for the top monthly game by hours watched (won by Fortnite for six of the 12 months); the top influencer in esports streaming (“Tfue” with a league of more than 30 million hours watched); top esports events (League of Legends World Championship); and break out data of competitive gaming streaming by both PC and mobile.

“2019 was another year of incredible growth for esports streaming and a huge year of expansion for Stream Hatchet,” Stream Hatchet CEO and co-founder, Eduard Montserrat, said.

“We’ve seen more incredible growth in the past 12 months, and that trend is certain to continue throughout 2020.”